It is possible for ghosts to get up to 'all sorts', including: 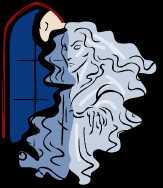 It is possible to group ghosts into various categories, including: 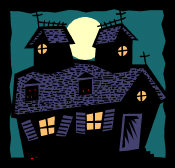 The first couple of these are for me:

The next is from my mother: 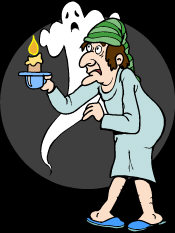 The remaining are from my grand-father: 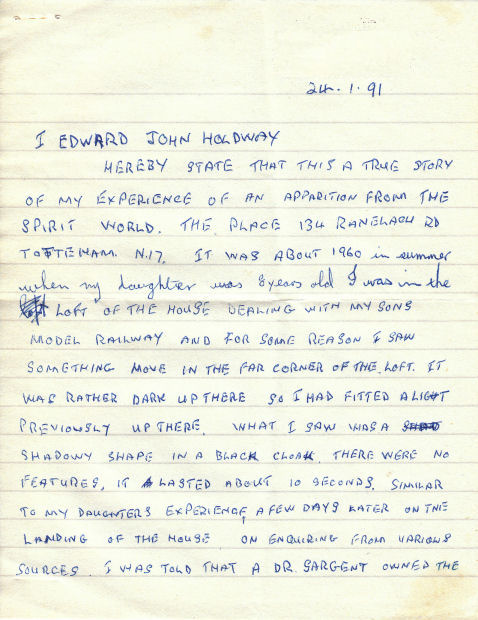 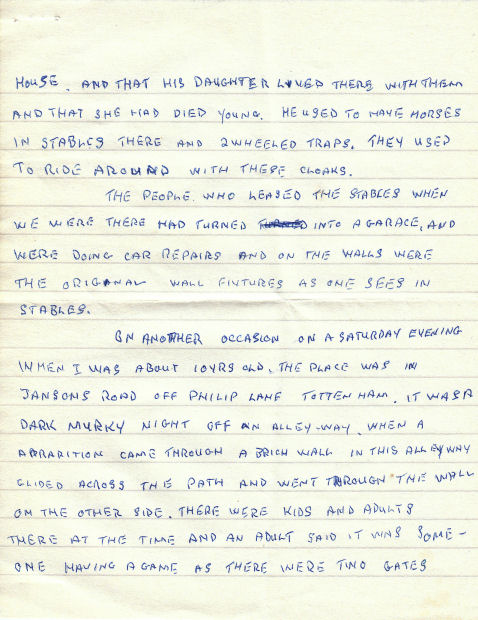 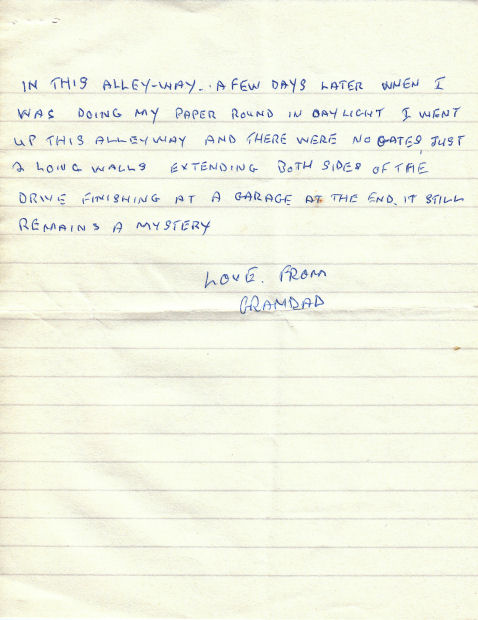 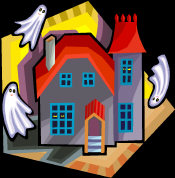 Ghosts can be encountered in many different places, including:

We shall 'part conclude' by mentioning two sayings:

I believe there's just too many people died since the dawn of man for there not to be something in it.

Within realms of fantasy, ghosts are 'often there' to entertain us. Within fantasy films Ghost Pirates still sail 'the seven seas' - with their pirate ships sometimes appearing as 'ghosts themselves'. Within fantasy novels, the concept of a ghost can be used to 'add weight' to a character - such as a family guardian that 'rises in times of need'. Within fantasy games, you can find the concept of a 'ghost hunter', or alternatively 'having some fun' being chased by a ghost. Ghosts can even be found within fantasy theme parks - dancing around the graveyard, pushing through walls, and rattling 'all manner of chains'. Whatever fantasy realms such ghosts exist in, they bring with them the concept of 'something beyond - what we can touch'. Thereby allowing us to interact with them, in different ways 'to what may be possible' in the real world ...

If Ever there was a Theme Park ride, that was turned into a Comedy Ghost Film, then that role belongs Solely, to Disney's - the Haunted Mansion:

As I have rode the Haunted Mansion ride (in Magic Kingdom) many times, I felt that this Fantasy Film, had a steep milestone to live up to (or is that a steep Gravestone to live up to?) ... For starters, it is hard to have a Haunted Mansion, just by itself. You need a storyline, and this film's storyline, of a love triangle (with a twist), really fits the Raven's bill! The film starts properly (for me), at the Iron Gates of the Haunted Mansion - which are of course, padlocked. Yet with some Ghostly magic, do the Mansion's Gate's then open ... And it is here, that I raised an eyebrow - as would I have been brave enough to enter? Probably not! Fortunately, such concerns are not faced, by the adventurer's of this film: the Evers Family :) And through those Iron Gates? Well ... First and foremost, I love this film's Fantasy Location - the Haunted Mansion itself :) There's Haunted Hallways, and Ghostly Stairs - with Spooky Curtains, and Guardian Knights. There's Spectral Ballrooms, and Darkened Bedrooms - with Glowing Candles, and Spying Portraits. There's Mothballed Libraries, and Marbled Studies - with Secret Passages, and Gothic Fireplaces. For this Haunted Mansion's, all Shroud in Dark - with Shimmering Cobwebs, and Scurrying Spiders, to Sleepless Tombs, and Spectral Carriages! For this Haunted Mansion's, all Cast in Light - with Flickering Candles, and Fiery Chandeliers, to Maleficent Green, and Whispered Balls! And of this Mansion, do I feel - no finer home, for Ghostly Haunts :) And it is here that I found, the next part of this Ghostly Tale, that I quite like ... As the Mansion itself, plays right into the variety of Ghosts, that are found within it's Haunted Halls :) There's Apparitions (both Touch and Wraith). There's Ghostly Balls (both Soul and Guide). There's Musical Instruments (both Sound and Chase). There's Replay Memories (both Masquerade Ball - and Locked in Time). There's Hitch Hiking Ghosts (both Speak and Hide). There's Suits of Armour (both Haunt and Axe). There's Spectral Horses (both Cart and Gallop). For in this Haunted Mansion - there's always My Way, You Know! Yet in all of this, did I find - three particular Ghosts, that are my favourites. First: is Ramsley (the Butler). For his Fantasy Character (being both straight faced and straight backed), helps guide the film, and is fundamental to it's storyline. Added to this, is the fact that Ramsley, made me jump three times: i) when he appears from the Knight's Corridor (in flashes of lightening) - would you hold your ground? ii) when he appears right behind Mr Evers (making him jump). iii) when he appears right behind Mrs Evers (making her jump). In all three, does Ramsley appear - to be Lending a Hand ... Second: is Madame Leota (the Gypsy Tarot Reader). Who for me, provides much of the comedy - whilst also guiding the Fate of both Mr and Mrs Evers (in a more helpful way). Madame Leota, is also responsible for some of the best footage, that's found within this film (in both terms of plot, and special effects). And of this best footage, do I have a favourite scene ... It's where Mr Evers first meets Madame Leota - and is soon being flown around the room: with Dancing Trumpets, Drums, Harps and Tarot Cards! Which eventually leads to, Mr Evers being chased down a corridor, by a whole ensemble - of Musical Instruments :) Third: is the Ghost Ball (which appears to Mr Ever's son and daughter). I liked the fact, that the Ghost Ball, is really a Will-o'-the-wisps - that has an honourable Quest, for the two children to undertake (even if it would have scared me, in reality!). I also enjoyed the humour, that surrounds the Ghost Ball - where the sister would follow it (being Brave), whilst her brother would not (shaking like a leaf). Even so ... There was one part of this film, that I found a little scary (especially the first time I watched it). It's where Mr Evers, undertakes the main Quest of the film (once he arrives at the Mansion), and goes down into the Mansion's Crypt. I was surprised by the Walking Dead (that he encounters down there), and felt that it would take a very brave person indeed, to Willingly Dive, Under the Water! Mind you, I now suspect that Ramsley, was solely responsible/behind this (in a bid to prevent Mr Evers, from completing his Quest). Although, if you don't like Spiders - then you'll probably be squinting, right after the Walking Dead scene, as well :) Overall: I feel that this is a lively Ghost Film, which brings the Haunted Mansion to Life - in a way that captures the fun side - of the original Haunted Mansion ride :) Yet at the same time, do I feel that the film, also contains an important message, about the need to maintain - a work life balance :) It took Mr Evers (as played by Eddie Murphy), several interactions with Ghosts - to fully realise/remember this ... Added to this, is the fact that several sub-plots of the film, are about Facing Your Fears, together with: You Try, You Fail, You Try, You Fail, You Try, You Fail - But You Only Truly Fail, When You Stop Trying! And you get a Fantasy Film, that has much more on the Inside of the Mansion, than on the Outside :) Finally ... I just loved the comedy scene in the Library/Study - as we all want a large Painting of Ourselves, hanging above the Mantelpiece - don't we? And if you should decide to join us ...

When it comes to a Computer Game that blends a Haunted House, with a Spooky Storyline and numerous Puzzles (to challenge your mind), then I'd be hard pressed to name one better than this: