In many religions, two families of spirit are (usually) accepted to exist as a matter of faith:

There are also other families/groups (which can be found throughout various cultures of the world): 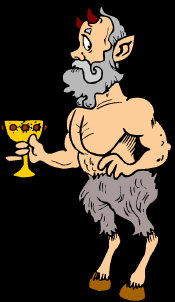 It is worth remembering that spirits can be good or bad (even within the same families!). And even good spirits can misbehave - if they feel that you're not treating them (or what they guard) correctly.

How are spirits created?

There are several possibilities: 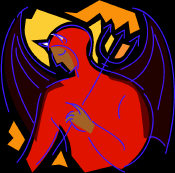 It is believed that some spirits can change 'what they are'. Perhaps the most dramatic example of this is that of the 'Fallen Angels'. Here, it is believed that various angels fell from the grace of God for one of several reasons:

In any case, such angels now seem to have reverted from their original peaceful purpose(s) - and have become equated with demons. As such, they are believed to have a hierarchy of their own, which includes spirits such as:

In general, such angels are believed to have power over the 'bad' side of humanity (such as greed). 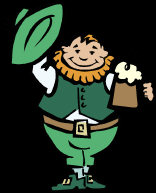 Here are some examples:

It is worth noting that many of these spirits could become annoying if you treat them badly (and thereby cause all manner of disturbances).

Here are some examples: 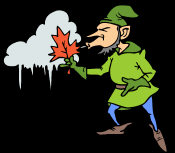 Spirits have been attributed with a great many attributes/roles throughout history - and one of the possible reasons for this is man's desire to explain the unexplainable. Now, even if much of this is 'made up'; enough folk still tell local tales and adhere to old customs (even in the modern day) that it would appear that we've played right into coalescence spirit creation! Today, it is even possible that demons are responsible for various forms of depression and low self-esteem (particularly if such thoughts seem to come from nowhere). On a happier note, we can all sleep much happier tonight knowing that spirits like Father Christmas and Jack Frost will be carrying out their usual duties throughout the year.

Perhaps the most famous 'winter spirit' of them all - is 'Father Christmas'. The spirit of Father Christmas is an 'interesting one' - as everyone knows 'exactly what he is' but without being able to define 'anything too specific' about him. For example, we all know that he comes from the North Pole - but we don't know 'exactly where' that is! We also know that he 'fly's through the sky' with his reindeer (delivering presents) but most of us would be 'hard pressed' to name all of his reindeer! In any case, should any 'reindeer list' include Rudolph or not? Although there's one fact about his 'Christmas Spirit' that we can all be assured of - he represents 'the season of merriment' that brings 'light to the darkness' at Christmas Time (and joy to all). Even if we think Christmas will 'last forever' - but still be over 'very quickly'.

Perhaps the most famous 'nature spirit' of them all - is 'The Green Man'. He is believed to live 'deep in the woods' where over the ages many people have reported 'to have seen his face' within the bark of a tree (sometimes his entire face appears in bark - but at other times, elements such as his hair, eyebrows and lips are 'made from' green foliage). Yet other people, are believed to have seen a 'man in green' walking within the woods (but lacking the 'full outline' of a man, more 'shadowy green' foliage instead). Whatever the green man is, it would 'appear to be wise' not to upset the greenery of the woodlands. In any case, the green man has become woven into our society - as many 'eating houses' are named after him, and are often located 'not too far' from a local wood.

Empires rise. Empires fall. In Ancient Egypt, who would know? The Pharaoh of King Tut! For Paths of Life, and Paths of Dead, go hand-in-hand, with Pharaoh Rule. He built an Empire, in a Day - known Ancient Egypt, through Today. He built a Kingdom, in a Night - known Ancient Heaven, through Tonight. He built a God, in Paths of Death - known Ancient Deity, through this Time. For King Tut knew ... The Riddles of a Fire so Bright. The Spells of a Fire so High. The Wards of a Phoenix so Fiery! He cast his spell, one Dark Sky - in blends of Orange, and of Red. He sung his rhyme, one Dark Eve - in blends of Yellow, and of Gold. He made his magic, one Dark Night - in blends of Crimson, and of Ochre. And behold ... A Fearsome Guardian, had he made - to guard his Empire, and his Realm. A Screaming Sentinel, had he birthed - to guard his Kingdom, and his Fortune. A Secret Ward, had he forged - to guard his Lineage, and his Sarcophagus ... For King Tut knew, that once he fell ... Wars of Egypt, near and far - invading foes, squabbling generals. Wars of Rule, harsh and cruel - invading famine, bicker plenty. Wars of Gold, bronze and yellow - invading tarnish, squander others! And so it was ... Entombment, in his Mummy Wraps - resin dew, drape of cloth. Entombment, in his Sarcophagus - locked within, Wards on cask. Entombment, in his Pyramid - placed beneath, Temple shrine. Whilst outside - Vultures gather! Yet in youth, King Tut chose, that his Kingdom, be for him - not for them! King Tut pondered, whilst he thought, ways to Guard, ways to Keep! King Tut versed, in Egyptian Lore ... Egyptian Birds, with Power of Flight - thy feathered fiend, fly so high. Egyptian Hieroglyph, with Power of Word - thy Egyptian Falcon, and his Spirit. Egyptian Rune, with Power of Ward - thy Seeing Eye, of Watchfulness. But still to learn, King Tut did - Egyptian Phoenix, and his Hieroglyph ... It came to him, one Dark Night, in Dreams of Conquest, and of Conquer :) Egyptian Phoenix - Egyptian Guard - Egyptian Hieroglyph! He knew at once, which Ward to set, upon his Temple, in Sarcophagus! Ssshhh ... Not tell a Soul :) For only King Tut would know, just what it is, these Powers of Fire, imbued within - his Guardian Fire Phoenix ... Born of the Sun God Ra, his Fire Phoenix - bore Bright of Day, in Dark of Night. Born of the Sun God Heliopolis, his Fire Phoenix - bore Heat of Furnace, in Cave of Cosmos. Born of the Sun Gods Ra and Heliopolis, his Fire Phoenix - bore Molten Blade, in Darkest Pit! As he called, all of those, who'd come for him, and his Fortune of Gold! His Wards were set ... In his Pyramid of Ancient Egypt, though none would see. In his Temple of Worship, though none would know. In his Sarcophagus of Underworld, though none would guess. And so it was, for all of Time, and all of Legend! King Tut slept, beneath his Wards, beneath his Guardian Fire Phoenix - beneath his Egyptian Fire God :) But alas! It was not to be ... With rise of Dawn, came Warring Army. With rise of Day, came Greedy Men. With rise of Night, came Plunder Loot! His Fire Phoenix awoke! Burning Tree, Rise of Ash! Piercing Scream, Falcon Beak. Bennu! Bennu! Egyptian Bird - Shine so Bright :) Bennu! Bennu! Egyptian Falcon - Rise so Brilliantly :) Bennu! Bennu! Egyptian Fire Bird - Soul Reborn :) And so it was ... Did King Tut rise, and Burn the Sky, of those that Dared, to awaken him - from his Underworld! For in Death, had King Tut changed. He knew what then, just what it meant, this Fire Phoenix Hieroglyph :) For Guardian Fire Phoenix, Egyptian Fire God - had cast it's Spell, upon his Form. King Tut could fly! King Tut could soar! King Tut could hunt - all of those, that Dared to take, his precious Gold! Phoenix Fire, Phoenix Blazed, through his Foes - in his Empires of the Night :)

Hey mon - woh there! Da thee seek Adventure? Or da thee seek our Treasures in da Cave? Be off with thee! This be no place for Weak of Spirit ... From Mountain Caves to Under Hills. From Roots so Deep to Stones in Peril. Speak up now! What Magic you say? Tread lightly mon! Be gone! Be gone! This Spirit we have, born in Quest. This Spirit we have, Transcend through Time:

At Norway's foot ya say? Yee are not the first to utter this phrase! In Scandinavia ya say? Yee shall not be the last to verb this way! I speak in Nature, I speak of Charm. For we've a family of Trolls - that bar ya way, along thy way, to Trollville. Bee - no Sunlight here, on Cloudy Day! I speak da Riddle, I speak da Door. What say yee, oh Smiley Troll? Two hands in pocket, with Forest step - da dips me toes, in Icy Spring: Butterfly. What say yee, oh skiing Troll? Two feet in place, with Mountain curve - da shouts me name, from Sloping side: Spring. From Trollville da we - Smiley Ski! What say yee, two-headed Troll? The branching of da River pass, the roots upon da Barking Tree - da Seas me swim, through Rapids ahead: Forth. What say yee, oh Hiking Troll? One hand in place, with Nature's Wood - da Tweets me worm, from Cuckoo in nest: Pass. From Trollville da we - two Paths to Hike! What say yee, oh Bearded Troll? Two Greys in White, with Windy hair - da Hides me way, from Greener hat: Yee. What say yee, oh Wizened Troll? With Magic of me, plus rhyme in thee - da Guides me way, from Norse to thee: Knot. From Trollville da we - Bearded Wise! For we've a family of Trolls - that bar yee way, along thy way, to Trollville: Butterfly Spring Forth - Pass Yee Knot! What's that you say? How dare you speak! Be turned to Stone ... These Trolls of Trollville, know thy Runes! Adventure: he seeks the way - but Trolls and their Magic, twists trails. Peril: she seeks the Gold - but Trolls and their Magic, like da Self, do Good in Life. Quest: they seek fulfilment - but Trolls and their Magic, go Fast or Slow but Go! What's that you say? You seek the Spirit of Norway? Well ... There be Seaside Towns, with Lantern pools. There be Homely Inns, with sense of Quite. There be Warring Blood, with Songs of Viking. There be ... Viking Longboat? We know thy name! Troll Magic - be Still be Quite ... In sense of Touch, this Viking name. In heat of Fire, this Viking came. In cold of Steel, this Viking thrust. In Valhalla, this Maelstrom ride! For wee six Trolls, bar yee way ... In Norway flows, with Seas of Wrath. In Arctic swells, with Wrath of Ice. In Mountain foot, with Blades of Rock. In Northern heights, with Shards of Mist. In Thoughts of Doubt, with Seeds of Self. In Thoughts of Lone, with by Myself. Go back! Go back! For wee six Trolls, test your Soul ... This Norway Spirit, in Paths of Daring. This Norway Spirit, Refusal to Quit. This Norway Spirit, Abide in Time. This Norway Spirit, with Thoughts of Flame. This Norway Spirit, with Strength in Grip. This Norway Spirit, with Know thy Truth! For wee six Trolls - know Spells of Old. For wee six Trolls - know Paths of Power. For wee six Trolls - know Beauty and Charm. A Spell we Cast, for Tests be Past ... Yee may pass. To Trollville!