Despite this, witchcraft underwent some dark times when it was banned and outlawed by various 'new' religions (which we won't get into here). As such, it is only within the past fifty years or so that witchcraft has been 'freed' again and practised openly (by those that are interested).

We shall now consider several important aspects of being a modern witch. 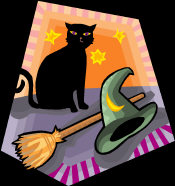 Witches feature a drive/desire to be closer to nature (both physically and spiritually); because in doing so they believe that it makes them happier and more well-grounded (both ethically and morally) than they would otherwise be (i.e. more balanced). There are many ways this closeness can be found, including:

Now, nature herself provides us with the four elements - each of which playing important roles within witchcraft:

These beliefs further translate into witchcrafts other main belief: that the divine is both male and female.

Witchcraft is old, and has given rise to many paths to interact with the divine (e.g. Celtic, Druidic, Gardnerian, Irish, Norse and Pagan). Although many of these paths are steeped in ceremony and hierarchy, it is also true that witchcraft is flexible - with the added bonus that if you don't like something, then you are free to 'create your own' path. This is especially true for solitary witches, who may be unable to find/attend a Coven (i.e. group of witches), and as such undertake only 'tasks' that they feel truly comfortable with. 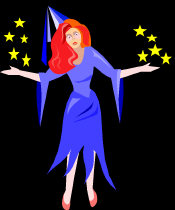 Casting a spell involves a witch sending her will/intent 'out into the universe' (towards a specific target - for a specific purpose). Spells rely upon the power that is 'within you' - thereby making use of the elements and the divine. As such, spells tend to focus on subjects such as: healing, relationships, protection and enhancement (e.g. 'help me learn').

Witches must be careful when casting spells - since magic has a habit of not working as intended. Several reasons for this are:

Even allowing for these, there is one area of magic that is considered (by many) to have a mind of its own: love. Here, even if a witch gets exactly what they wanted, it may turn out to make them/others very unhappy. 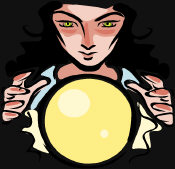 Here a witch attempts to discern answers to questions which are otherwise unknown. These can be questions relating to:

Further to this, it is important to mention that witches don't believe in 'summoning back the spirit of a dead person' for assistance in such matters (that is left to mediums).

When witches scry for other people, divination usually goes by the name of 'fortune telling'.

You may wonder what's to stop a witch becoming bad (i.e. casting hexes and revenge spells). Well, there are two guidelines which help discourage such activities:

Further to this, is the witch's belief/aim that they should only 'use from nature' what nature can spare. For example, if a witch is making a necklace, then they should aim to use materials that have already fallen from a tree (e.g. after a thunderstorm) - and not those materials that they 'have to take themselves'. 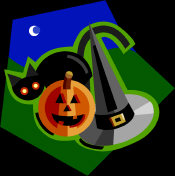 Witches believe that they can increase their magic's potency (and chance of succeeding) by adhering to various cycles. One such cycle is the 'Wheel of the Year' - a collection of eight special days (called Sabbats). Sabbats are important to witches, since they celebrate the changing seasons and mark important festivals that are associated with the divine. On each Sabbat, a witch can perform certain types of spells (with improved results); or simply celebrate the traditions that fall on that particular date. Here we list the Sabbats (including approximate dates and basic descriptions of each):

Since the Sabbats are spaced throughout the year, it is usual for witches to make use of the monthly cycle of the moon to help empower their spells. Each phase of the moon can benefit certain types of magic:

Witchcraft is regarded as a 'nature based religion' that can help people lead 'kinder more balanced lives'. It makes use of magic, but since magic is controlled through the intention of the wielder, it can accomplish much good. At the very least, many of its practices appear to be 'for the good of the planet' - which can benefit all of us.

Within realms of fantasy witches are always 'in the middle of the action':

It's also possible for fantasy witches to walk 'the paths of combat' - and when they do, they shall go by the term of Warlock (which can also be used to describe a male Wizard). In any case, their characters are often portrayed as being 'somewhat eccentric' (even accounting for 'the other strange characters' that inhabit many fantasy worlds). When it comes to female fantasy witches, the term Sorceress (derived from the male's Sorcerer) can also be used 'to name them'. Only here, does the term Sorceress - usually equate with 'the dark side', even for so-called 'good witches' ...

Does she hunt through the Graveyard, on a Starless Night? Does she stalk through the Tombstones, of a Moonlit Realm? Does she crawl through the Remnants, of once Mighty Men? Does she scream through the Night, in Raven's Speak? Be-spell you she will, this Zombie Girl - thy Raven's Croak Cemetery Witch:

You'd feel her Presence, at the first shift of Dirt. You'd hear her Call, at the first Croak of Raven. You'd sense her Touch, at the first claw of Talon. You'd know her Power, at the first lock of Eyes. For she's a Zombie, and she's Dead! And yet ... You'd feel her Presence, in Witchcraft form. You'd hear her Call, in Witches Chant. You'd sense her Touch, in Witches Blood. You'd know her Power, in Cauldron's Brew. For she's a Witches Witch - a Necromancer, who knows not now, this Path of Dead! And yet ... You'd feel her Presence, at the first sight of Them. You'd hear her Call, at the first squawk of Them. You'd sense her Touch, at the first flock of Them. You'd know her Power, in guise of Herald. For she's a Raven's Girl, evermore nevermore, at the front of her - Raven's Might! In Darkness does she dwell. In Twilight does she live. In Dark Fantasy does she abide. In Darkest Night, does she Rise - but only when, Moon's just bright :) For only then, will her Ravens come ... They'll swarm the Night, from Ravens afar. They'll silhouette in Twilight, from Ravens close. They'll gift you from Dark Fantasy - a Daemon's Daemon, Strength of Nine. They'll haunt you in this Darkest Night, in Paths so Dead, and Paths so Rise! For only then, may you wonder - who is Master, who is Mistress? In Zombie form, it's hard to say ... Her Daemon skin, fights for dominance. Her Daemon claws, rend the ground. Her Daemon eyes, stare at you. Her Daemon mouth, speaks to you: Riddle, Riddle, Dark in Time. Who enters my domain? I am of Grave, I am of Night. I am of Tomb, I am of Eve. I am of Dead, I am of Life. Come to me - my Love :) No! No! But once she Lived ... A Princess: so fair she was - of Armies gone, and Kings of Old. A Princess: with long Black Hair - not all in Death, still some remains. A Princess: of Midnight's Mistress - with Curves of Lure, and Chest so Fine. I see ... Not all is Dead! For still, some remains ... No! No! I was a Witch. I walked in pages of the Spells. I walked in Magic of the Realm. I walked in verses of the Chant. I walked in Witchcraft of the King. I ... See that Night, I ... when Ravens came to me ... I remember now: a pact was made - with Raven's Raven. More of Power. More of Sorcerer. More of Dark. Croak! Croak! Princess no more ... I must obey! Who enters my domain? For I'm a Zombie of these Ravens, from afar, we wreak of Death. I do their bidding, as I Will. I'll sink my Teeth, right into Thee. I'll tear my Talons, through your Resolve. I'll show you Curve. I'll show you Cleave. I'll show you Smile. I'll show you Flirt. I'll teach you of the Darkest things. I'll bring new meaning, to the term - Deadly Embrace :) For I'm a Raven's Girl now, who walks in Paths of Necromancy, and knows well - Rise of Zombie. For I'm a Raven's Guard now - a Sentry of this Cemetery, I protect my Ravens. For I'm a Raven's Wing now - no light of touch, just Stone of Cross. For I'm a Raven's Croak now - no thought of own, just answer Riddle! Croak! Croak! No! No! I once was ... Barest Touch, Light of Day. I danced within, a Palace so Fine. Yes! Yes! I cast a Spell. One of Dark, for Raven Friends ... A Sorcerers Power, did my Spell - turn Day to Night, turn White to Black, turn Life to Death. For in my Cauldron's Brew, did I forget, just who I was! My mind was changed, through slight delay - in more decay, bad memory! My Daemon won ... Croak! Croak! Who be you that enters my domain? And that of my Ravens? And that of my Graveyard? And that of my Kingdom? And that of my Night? And that of my Empire? Scream!!! You may never leave ...Zombie now.

In Velvet's Kiss, Paths be Grinned. In Midnight's Realm, Chains be Torment. Born of Darkness and of Fire - this Witch's Glamour, Seduction of thy Steps to be:

Standing in her Under Verse, thinking of thy Spells to Cast. One Chant here, one Rhyme there - Halo of thy Witch's Soul. Guarding in her Nether Realm, musing on thy Powers to Use. One Bite here, one Touch there - Dancing of thy Vampire's Heart. Warding in her Darkest Guise, dreaming of thy Fun Tonight. One Wink here, one Smile there - Knowing of thy Lilith's Ways ... In Sorceress Power, with Licks of Flame. In Sorceress Might, with Flicks of Fire. In Sorceress Stance, with Dance of Orb. Liliana - Queen of Witch! A Necromancer's Power, with Walls be Damned. A Necromancer's Might, with Guards be Bone. A Necromancer's Stance, with Dreams be Dark. Liliana - Queen of Vampire! Thy Forbidden Power, with Lures of Heart. Thy Forbidden Might, with Chains of Soul. Thy Forbidden Stance, with Robes of Serpent. Liliana - Queen of Lilith! For it was indeed, I'd come across her in my Dreams ... With Gold of Jewel and Silver Vine. With Curve of Fit and Shapely Moon. With Flesh of Sin and Brunette's Hair. With Eyes of Pool and Luscious Lips. With Lace of Leg and Golden Crown. With Paths of Neck and Shoulder Fine. Thy Witches Queen - donned Fairy Glamour! For it was indeed, I'd come across her in my Nights ... With Cold of Rock and Earthly Grave. With Tight of Press and Stony Place. With Field of Fright and Rivers Run. With Eyes of Lost and Tempting Gate. With Web of Snare and Hellish Glow. With Chains of Arm and Spider's Fang. Thy Vampires Queen - donned Sweetish Scent! For it was indeed, I'd come across her in my Way ... With Quests of Fire and Trusted Steel. With Light of Cave and Shrouded Glimpse. With Steps of Chance and Rising Heat. With Eyes of Lure and Lusting Way. With Robes of Queen and Purple Gleam. With Powers of Witch and Vampire's Reign. Thy Lilith's Queen - donned Empress Liliana! Queening of her Subterranean. Master of her Darkened Way. Mistress of her Dragon's Breath. Liliana ... Royalty of her Kingdom's Rule. Be-speller of her Darkest Night. Commander of her Foundries Fire. Liliana ... Regal of her Empires Dark. Caster of her Gemstone Bright. Forger of her Army's Might. Liliana ... Said to Me: Rise in Power, Rise in Might, Rise in Status, Rise in Fight, Rise in Rule, Rise in King, Rise in Heart, Rise in Time - for Liliana donned Necromancer, and her Midnight Spell :)